Difference between revisions of "Amplitude modulation"

Amplitude modulation (AM) is a modulation scheme, notably used in AM radio.

An amplitude transceiver modulates the amplitude of an sinusoid carrier signal using the incoming signal. The carrier signal is sinusoid with a fixed Frequency, usually much higher than the highest frequency occurring in the spectrum of the modulating signal.

Base for transmission is a sinusoid carrier signal with continuous carrier frequency <math>f_c</math>:

This is modulated by the incoming signal, here modeled by a simple sine with frequency <math>f_m</math>:

The actual signal coming out of the AM modulator is simply the product of both functions <math>\omega_c \cdot \omega_m</math>. Evaluating this in detail leads to the expression: 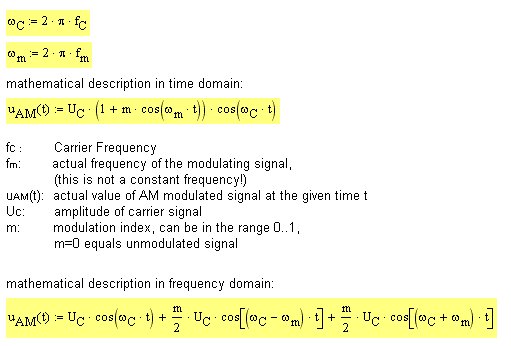 The first formula describes what happens in time domain. It's basically multiplying of two cosine signals leading to the time domain picture in the example below.

An AM signal shows up as a single peak in the frequency spectrum.

Echoes, multipath signaling, atmospheric and meteorologic phenomenons like lightings and electrostatic discharges contribute noise that simply gets added to the transmitted signal. Most other Modulation Schemes are less sensitive to noise.