Difference between revisions of "Eb/N0"

The term Eb/N0 ("e bee over en zero") is used in digital communications as a measure of signal strength to estimate the bit error rate.

It is defined as the average energy per bit (Eb) relative to the spectral noise density (N0) and gives a basic measure how strong the signal is at the receivers input.

The definition assumes that inside the channels bandwidth B the Gaussian distributed noise energy can be calculated as N0 = k*T*B (may be additionally shaped by filters), where k is Boltzmann's constant and T is absolute temperature in Kelvin.

With the knowlegde of modulation and Eb/N0 one can estimate the available BER or vice versa calculate the RF power for a given data set of modulation, channel bandwidth, symbol rate, losses and wanted bit error rate. Eb/N0 gives also modulation choices for a channel depending on wether bandwidth (i.e. cable TV) or power (i.e. sat) is the limiting factor.

In datasheets Eb/N0 is usually scaled in dB. As Eb/N0 relates to power and spectral power density, use

NOTE: If using dB, in formulas multiplication turns to addition and division turns to subtraction.

Estimated BER vs Eb/N0 for a few modulations 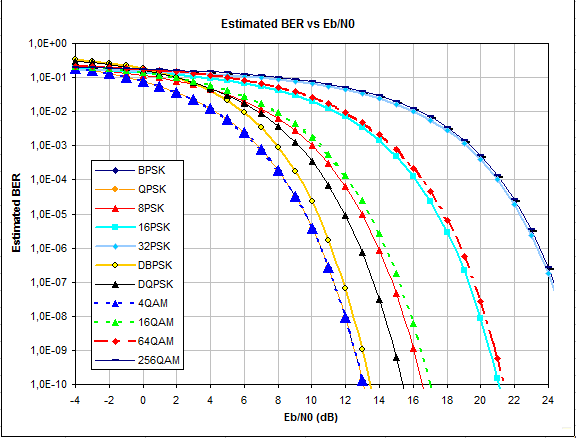