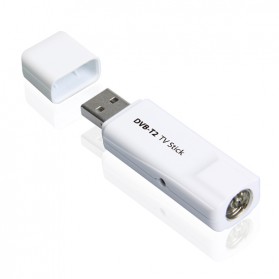 The Geniatech T230C (also branded as MyGica T230C with a black case instead of a white one) is an evolution of Geniatech T230. Although it has the same external appearence, it uses different hardware, and is not supported by mainstream 2016-grade kernels. The MyGica-branded device can be found on websites that ship hardware directly from China.

The eyeTV T2 is the same device, just without IR. Targetting a Mac OS audience, it is 5 to 6 times as expensive as the MyGica T230C which does feature IR support (and comes with a 28-button remote control). The eyeTV T2 case is silver/grey with a transparent cap.

The device can be used with the PadTV HD app on Android if connected via a USB OTG adapter. That app supports H.265, but the phone must be fast enough. On Windows, 28 Jun 2017 drivers (shipped with some devices in 2018) are required to prevent frequent blue screens in nearly all apps.