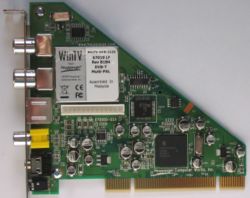 2. Physically install the WinTV PCI card into the system.

4. Check to see if the saa7134 driver has been loaded by issuing the following command:

Issue the following command to validate that the WinTV card has been registered as a device:

5. Enable the saa7134 driver can locate the firmware needed to program its DSP Chip (/lib/firmware/dvb-fe-tda10045.fw)

6. Verify that the dvb-fe-tda10045.fw file is successfully loaded