Difference between revisions of "Twinhan VP-1025"

This low-profile-card is equipped with the Conexant Bt8xx PCI bridge and uses the bttv driver.
Well suppported by LinuxTV drivers.


Here is a scan of the card: 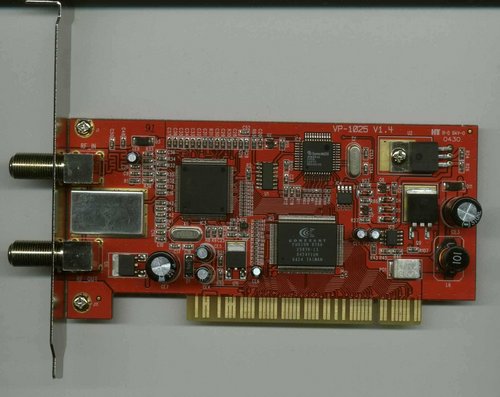 It has been suggested by linuxtv developer that the following source code change does not help please be advised.

With the recent kernel drivers the DST front end may fail to load. Kernel 2.6.17 for example. In the source edit drivers/media/dvb/bt8xx/dst.c at about line 89. In the function "int dst_gpio_outb" look for udelay(1000). Change that to msleep(200). Compile and install the modules and your 1025 will work just fine.

If you are having trouble using your card, in particular if the drivers load without errors but the device files (/dev/dvb/*) don't get created, (or they could be created but the card doesn't work anyway) cold booting the system could resolve your problem, on some motherboards, the card doesn't reinitialize properly on reboot, so turning off the system completly may be needed to get the card to work