GStreamer is a toolkit for building audio- and video-processing pipelines. A pipeline might stream video from a file to a network, or add an echo to a recording, or (most interesting to us) capture the output of a Video4Linux device. Gstreamer is most often used to power graphical applications such as Totem, but can also be used directly from the command-line. This page will explain how GStreamer is better than the alternatives, and how to build an encoder using its command-line interface.

Before reading this page, see V4L capturing to set your system up and create an initial recording. This page assumes you have already implemented the simple pipeline described there.

No two use cases for encoding are quite alike. What's your preferred workflow? Is your processor fast enough to encode high quality video in real-time? Do you have enough disk space to store the raw video then process it after the fact? Do you want to play your video in DVD players, or is it enough that it works in your version of VLC? How will you work around your system's obscure quirks?

Use GStreamer if you want the best video quality possible with your hardware, and don't mind spending a weekend browsing the Internet for information.

Avoid GStreamer if you just want something quick-and-dirty, or can't stand programs with bad documentation and unhelpful error messages.

Why is GStreamer better at encoding?

GStreamer isn't as easy to use as mplayer, and doesn't have as advanced editing functionality as ffmpeg. But it has superior support for synchronising audio and video in disturbed sources such as VHS tapes. If you specify your input is (say) 25 frames per second video and 48,000Hz audio, most tools will synchronise audio and video simply by writing 1 video frame, 1,920 audio frames, 1 video frame and so on. There are at least three ways this can cause errors:

GStreamer solves these problems by attaching a timestamp to each incoming frame based on the time GStreamer receives the frame. It can then mux the sources back together accurately using these timestamps, either by using a format that supports variable framerates or by duplicating frames to fill in the blanks:

GStreamer, its most common plugins and tools are available through your distribution's package manager. Most Linux distributions include both the legacy 0.10 and modern 1.0 release series - each has bugs that stop them from working on some hardware, and this page focuses mostly on the modern 1.0 series. Converting between 0.10 and 1.0 is mostly just search-and-replace work (e.g. changing instances of av to ff because of the switch from ffmpeg to libavcodec). See the porting guide for more.

Other plugins are also available, such as GEntrans (used in some examples below). Google might help you find packages for your distribution, otherwise you'll need to download and compile them yourself.

gst-launch is the standard command-line interface to GStreamer. Here's the simplest pipline you can build:

GStreamer can build all kinds of pipelines, but you probably want to build one that looks something like this: 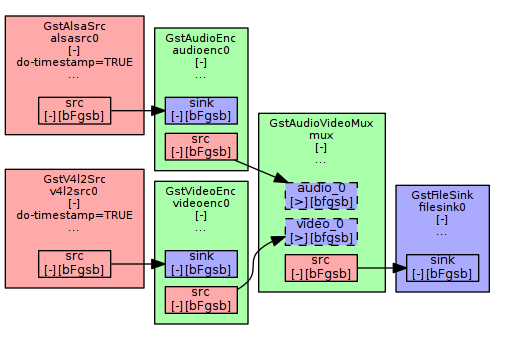 To get a list of elements that can go in a GStreamer pipeline, do:

Pass an element name to gst-inspect-1.0 for detailed information. For example:

The images above are based on graphs created by GStreamer itself. Install Graphviz to build graphs of your pipelines. For faster viewing of those graphs, you may install xdot from [1]:

You may also compiles those graph to PNG, SVG or other supported formats:

To get graphs of the example pipelines below, prepend GST_DEBUG_DUMP_DOT_DIR=gst-visualisations to the gst-launch-1.0 command. Run this command to generate a graph of GStreamer's most interesting stage:

Remember to empty the gst-visualisations directory between runs.

gst-launch-1.0 is the main command-line interface to GStreamer, available by default. But entrans is a bit smarter:

You will probably need to build your own GStreamer pipeline for your particular use case. This section contains examples to give you the basic idea.

A simple pipeline that initialises one video source, sets the video format, muxes it into a file format, then saves it to a file:

This will create an AVI file with raw video and no audio. It should play in most software, but the file will be huge.

A simple pipeline that initialises one audio source, sets the audio format, muxes it into a file format, then saves it to a file:

This will create an AVI file with raw audio and no video.

Instead of a straightforward pipe with a single source leading into a muxer, this pipe has three parts:

Muxers combine data from many inputs into a single output, allowing you to build quite flexible pipes.

The tee element splits a single source into multiple outputs:

As well as piping streams around, GStreamer can manipulate their contents. The most common manipulation is to encode a stream:

The theoraenc and vorbisenc elements encode the video and audio using Ogg Theora and Ogg Vorbis encoders. The pipes are then muxed together into an Ogg container before being saved.

Different elements work at different speeds. For example, a CPU-intensive encoder might fall behind when another process uses too much processor time, or a duplicate frame detector might hold frames back while it examines them. This can cause streams to fall out of sync, or frames to be dropped altogether. You can add queues to smooth these problems out:

This creates a file using FLAC audio and x264 video in lossless mode, muxed into in a Matroska container. Because we used speed-preset=ultrafast, the buffers should just smooth out the flow of frames through the pipelines. Even though the buffers are set to the maximum possible size, speed-preset=veryslow would eventually fill the video buffer and start dropping frames.

Some other things to note about this pipeline:

Common caputuring issues and their solutions

If motion that should appear smooth instead stops and starts, try the following:

Check for muxer issues. Some muxers need big chunks of data, which can cause one stream to pause while it waits for the other to fill up. Change your pipeline to pipe your audio and video directly to their own filesinks - if the separate files don't judder, the muxer is the problem.

Check your CPU load. When GStreamer uses 100% CPU, it may need to drop frames to keep up.

As a general rule, you should try increasing buffers first - if it doesn't work, it will just increase the pipeline's latency a bit. Be careful with nice, as it can slow down or even halt your computer.

Check for incorrect timestamps. If your video driver works by filling up an internal buffer then passing a cluster of frames without timestamps, GStreamer will think these should all have (nearly) the same timestamp. Make sure you have a videorate element in your pipeline, then add silent=false to it. If it reports many framedrops and framecopies even when the CPU load is low, the driver is probably at fault.

If your video contains periods of video noise (snow), you may need to deal with some extra issues:

GStreamer comes with a extensive tracing system that let you figure-out the problems. Yet, you often need to understand the internals of GStreamer to be able to read those traces. You should read this documentation page for the basic of how the tracing system works. When something goes wrong you should:

The chip that captures audio and video might not deliver the exact framerates specified, which the AVI format can't handle. The audiorate and videorate elements remove or duplicate frames to maintain a constant rate.

View pictures from a webcam (GStreamer 0.10)

This captures 3 minutes (180 seconds, see first line of the command) to test-$( date --iso-8601=seconds ).mpg and even works for bad input signals.

For most use cases, you'll want to wrap GStreamer in a larger shell script. This script protects against several common mistakes during encoding.

See also the V4L capturing script for a a wrapper that represents a whole workflow.

The script uses a command line similar to this to produce a DVD compliant MPEG2 file.