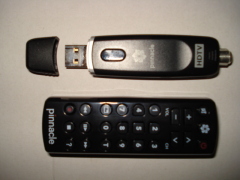 It is supported under Linux since kernel 2.6.28.

Note: This device is the most recently released under the branding name "Pinnacle HD Pro Stick", and it should be noted that this one is NOT a minor revision, rather, it differs significantly from the previous device sold under the same name. Information regarding the older version of the HD Pro Stick device (USB ID 2304:0227) can be found here: Pinnacle PCTV HD Pro Stick (800e)

This device supports ATSC (i.e. OTA Digital TV) and analog NTSC. It also has a connector on the side for an A/V cable dongle. The package includes a small dipole antenna and a short USB extension cable.

The device identifies itself as a "PCTV 801e" and the subsystem information provided by lsusb -v is 2304:023a.

In order to use the LinuxTV driver, you need to download and install the firmware for both the dib0700 and the xc5000. Note that if your firmware typically goes somewhere other than /lib/firmware, change the last two lines.

If using Ubuntu 9.10 (Karmic) or later, none of these steps are required as both firmware images bundled into the distribution.

If using Linux kernel 2.6.31 or you are using the latest http://linuxtv.org/hg/v4l-dvb tree:

If you are using an older kernel than 2.6.31 and not using the latest v4l-dvb code: