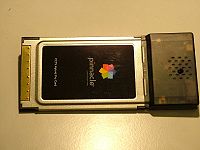 added support for FM radio, you can test it using gerd knorr's "radio" and the usbaudio_setup.sh script, to "fix" the crackling audio problem use -b instead of the -w sox option.

PAL-BG/PAL-DK analogue TV is now supported including audio, though I experienced some crackly audio here sometimes. For setting up audio I used usbaudio_setup.sh

crackling audio is solved if you use 8 bit audio only

the dvb-t demodulator is able to detect channels, the data transfer itself doesn't work yet.

got one step further with it, there's a problem with the PCI subsystem and resource allocation, it's documented in the discussion tab how to solve it.. this brings development one step further to get DVB-T work soon

there's some experimental code in

analogue TV seems to work, without audio at the moment.

This device is currently not supported, support has to be added to the cx88 driver.

People who own such a device

feel free to add yourself here, testers will always be needed!